The National Guard Bureau is preparing an Environmental Impact Statement (EIS) in accordance with the National Environmental Policy Act (NEPA) to evaluate the potential environmental impacts of its proposal to beddown F-15EX and F-35A aircraft at alternative locations.

The National Guard Bureau is requesting the public's input as it develops the EIS. Although public scoping comments were due by September 2, 2022, to be considered in development of the Draft EIS, comments received after September 2 will still be reviewed and considered throughout the process.

Click here for information on how to submit written comments.

The Department of Defense, Department of the Air Force, National Guard Bureau are the lead agency for the Proposed Action and are responsible for the scope and content of the EIS.

The Federal Aviation Administration (FAA) is a cooperating agency because two of the alternative locations are on joint-use airfields where FAA would have a federal action in approving changes to the Airport Layout Plan. In addition, the FAA provides leadership in planning and developing a safe and efficient national airport system to satisfy the needs of the aviation interests of the U.S., with consideration for economics, environmental issues, local proprietary rights, and safeguarding the public investment.

The Department of the Navy is a cooperating agency for this EIS because two of the alternative locations are on Navy installations where the Navy has special expertise and may have a connected federal action.

The National Guard Bureau, FAA, and Navy are coordinating to develop this document to meet each agency's distinct obligations under NEPA (42 USC 4321-4347) to support the decision-making of all three agencies.

Stay up to date!

The National Guard Bureau wants interested parties to be aware of progress on the project and opportunities to be involved during the environmental review process. Join the mailing list to receive project notifications. Visit the comment form to submit a comment for consideration in development of the Draft EIS. 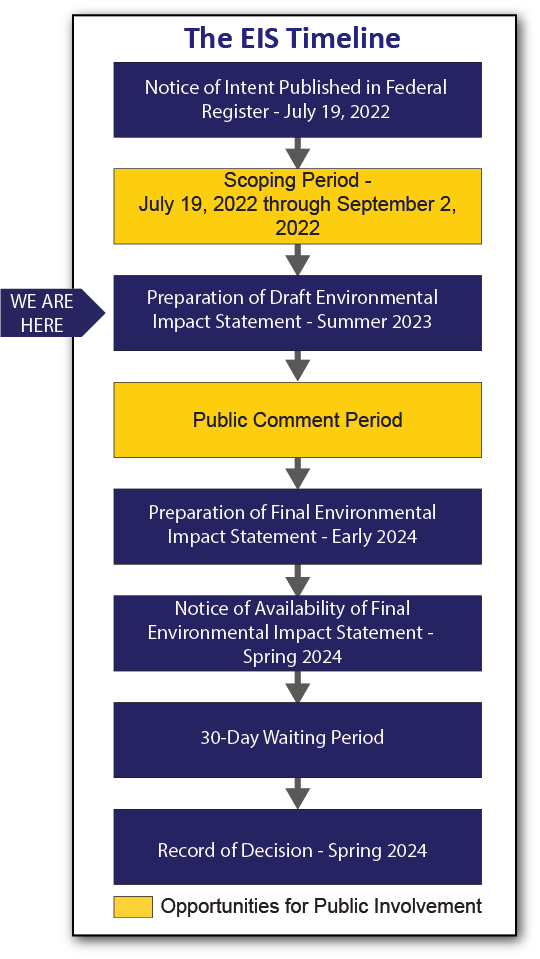